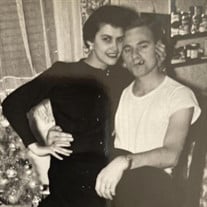 Mary Clement Fernandez Barnett joined her beloved husband Leon in heaven on March 29, 2022 in San Antonio, Texas. Mary was born on March 4, 1934 in Tyler, Texas to parents Elizabeth and Edward Anthony Fernandez. Mary was preceded in death by her beloved husband, Charles Leon Barnett; and her sister, Martha Matthews. She is survived by her daughter, Melissa Marino (Charles); son, Charles Derek Barnett (Anastasia); brothers, Edward Roberts and Joseph Fernandez; brother in law James Barnett; step-grandchildren, Chris, Elise, Merry and Greg Marino; grand dog, Bella; and many more extended family and friends. Mary and Leon were introduced by Mary’s brother Edward Roberts. Mary was voted Most Attractive in High School, after this recognition Mary and Leon were known as “Beauty and the Beast”. Mary received a scholarship to and attended Tyler Jr College. Mary and Leon were married on May 28, 1956, in Sherman Texas, shortly after that Leon volunteered for the draft, and the Army stationed them in Germany. Over the next 2 years they enjoyed their travels to many European countries and cities. They settled in San Antonio and raised their family. The family would like to offer our sincere thanks to Neela Patel, M.D. and the staff at UT Health Geriatrics and Palliative Care Clinic, The Etta Shavano Park, Mission Home Health, Guiding Light Hospice and Alamo Heights Health and Rehabilitation Center. SERVICES Visitation will be held on Sunday, April 3, 2022 from 6:00pm-9:00pm at Mission Park Funeral Chapels North. The Rosary will be on Monday, April 4, 2022 at 10:00am, followed by a Funeral Mass at 10:30am at St. Matthew’s Catholic Church. Interment will follow at Mission Burial Park North. For personal acknowledgement, you may sign the online guestbook at www.missionparks.com

The family of Mary Clement Barnett created this Life Tributes page to make it easy to share your memories.

Send flowers to the Barnett family.