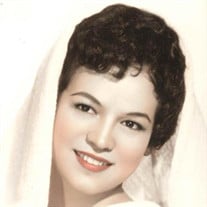 Mary J. C. Garcia entered eternal rest on May 3, 2022 at her home in Helotes, Texas surrounded by family. Mary was born in San Antonio, Texas on October 19, 1938. She was blessed to be able to visit with numerous family, friends and employees before her passing. Mary was so proud to be a cheerleader at Fox Tech High School where she graduated from. After graduation she worked at her family’s business Mario’s Restaurant located in the heart of the Westside in downtown San Antonio. She was an avid learner and it was not long before she was managing the books for the restaurant. It was at Mario’s where she met her husband of 58 years Carlos R. Garcia. The two married in 1964 and had their first child Jessica Marie in 1968. Their twin boys Carlos Jose and Gabriel Mauro were born in 1970. Mary and Carlos realized that the restaurant business was to be their destiny. In 1972 they took a huge leap of faith and sold their modest home on Cherry Ridge Street to purchase a small restaurant in Helotes and named it the El Chaparral Mexican Restaurant. The restaurant had small living quarters where they raised their children and created many delightful family memories. Carlos was the cook and Mary was the Bookkeeper. The restaurant thrived and the family moved into their current home in Helotes. All the while Mary continued to work at Mario’s during the day and at the El Chaparral at night. Mary had a tremendous appetite for work and doing things the right way. She was a perfectionist and always balanced to the penny. She put everyone needs before her own. She was a giver and a doer that led by example. She believed her biggest accomplishment was being a good wife and providing for her family. Mary had a special gift of always considering others needs and giving to help them in any way she could. She simply wanted the best for everyone and it showed through her loving and generous heart. She changed many people’s lives and for that we will be forever grateful. She is preceded in death by her parents, Lucresia and Mauro Cantu, her precious and only daughter Jessica Marie, brother Mario Cantu, sister, Olivia C. Rodriguez. Mary is survived by her loving husband Carlos R. Garcia, twin son Carlos J., wife Christina, grandchildren, Sophia, Carlos. Jr., Leonardo and Valentina, twin son Gabriel M. wife Patricia, granddaughters Natalia and Alexia, brother Hector J. Cantu, niece Zina Stark, nephew Hector “Tito” Cantu, niece Esmeralda Rodriguez, husband Victor G., great nephew Julian G. and numerous family members.

Mary J. C. Garcia entered eternal rest on May 3, 2022 at her home in Helotes, Texas surrounded by family. Mary was born in San Antonio, Texas on October 19, 1938. She was blessed to be able to visit with numerous family, friends and employees... View Obituary & Service Information

The family of Mary J. C. Garcia created this Life Tributes page to make it easy to share your memories.

Send flowers to the Garcia family.