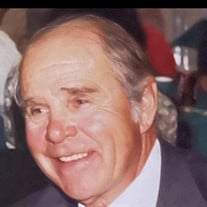 Mike E . Dossett Sr., known as Eddie in younger years, was born February 26, 1923 in San Antonio, Texas to Mike Nicolas Arciniega and Florence May Dossett. He went to be with our Lord and Savior at 98 ½ years old on December 21, 2021 in San Antonio, Texas. During his battle with respiratory issues, he was lovingly surrounded by and cared for by Linda, Mike Dossett Jr, and the Doctors and nurses at Embrace Hospice, who were there to help Dad on his end of life journey. His son, Mark Dossett drove from Georgetown , Tx. every week to spend time with him and manage his affairs. Melody Chestnut , his daughter also came to help out. His granddaughter, Tina Newlin of Round Rock Texas was a regular visitor and helped us immensely with care, reading scripture, and encouraging him. Mike is survived by his three children, Mike E. Dossett Jr. and wife Linda of Schertz, Tx, Mark Dossett and wife Diane of Georgetown, Tx, and Melody Chestnut of Round Rock, Texas. Mike has also has 9 grandchildren, 26 great grandchildren, and 2 great great grandchildren from his children in Texas. Mike is survived by 3 step daughters, Sandra (Schnurstein) Kent of Grandville, Michigan, Karol (Keglovitz) Jenney and husband , Ray of Battle Creek, Michigan , and Kelly (Keglovitz) Penskar and husband, Donald of Kalamazoo, Michigan. His step son, Gerald Schurstein, DDS preceded him in death as did his wife, Victoria. Mike has 6 grandchildren and 10 Great grandchildren from his step children in Michigan. Mike enjoyed playing football and basketball in high school. His love of sports continued throughout his life and he was an avid golfer. He was delighted when he was 94 to say I shot my age today! Mike enlisted on August 1, 1941, in the Army and served 9 months 13 days. He went on to serve in the Air Force as an airplane mechanic 685. By the time of separation in November 1945, he had achieved rank of S Sargent. He worked for civil service in San Antonio and Michigan where he evaluated, tested and procured equipment for the military for over 35 years until he retired. Whereupon, he returned to Texas with Vicky, his wife, in 1979. Mike also worked at Alamodome for about 5 years until he was in his late 80’s. Vickie and Mike were married in Battle Creek, Michigan on February 10,1979. They moved to Texas in 1979 . They purchased their home in 1982 where they lived independently for over 39 years. They enjoyed playing golf, ballroom dancing, gardening, playing Mexican train, Christian love inspired novels, and attending The Hills Baptist Church together. Lulu, their dog for many years, was a special friend to both. Among his others interests was being a Mason for over 60 years. He also was a great handyman and did all his own repairs. He was up on the roof for repairs or climbing trees to trim at 90! Heaven gained a very special man. He will be missed dearly by all. Burial will be at Fort Sam Houston at 2:15pm.

Mike E . Dossett Sr., known as Eddie in younger years, was born February 26, 1923 in San Antonio, Texas to Mike Nicolas Arciniega and Florence May Dossett. He went to be with our Lord and Savior at 98 ½ years old on December 21, 2021 in... View Obituary & Service Information

The family of Mike E. Dossett created this Life Tributes page to make it easy to share your memories.

Send flowers to the Dossett family.