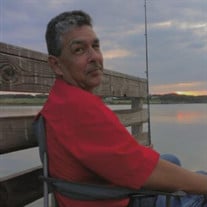 Oscar Delgado Sr. entered eternal rest on January 30, 2022, at the age of 66. He was born on July 7, 1955, in San Antonio, Texas, to Walter and Concepcion (Hernandez) Delgado. After completing school, Oscar worked for the San Antonio Housing Authority for ten years, and then moved to the San Antonio Water Board where he retired at the age 54. Oscar loved fishing, camping, lotto tickets, going to the casinos and watching sports. His favorite teams were the San Antonio Spurs and the Dallas Cowboys. He loved to bar-b-que with family and friends and had a great sense of humor even though he could never finish a joke. Oscar was always willing to help a friend, neighbor and/or family member since he was a jack of all trades. Oscar was a devoted husband, father, grandfather, and great grandfather. His hugs were filled with warmth, and his presence is irreplaceable. He was a strong man that didn’t let life get him down. He always worked with what he had and made the best of it. He pushed his loved ones to be the best they could be and was very passionate about life. Even in the face of adversity he lived his last days to the fullest. He is preceded in death by his parents Walter and Concepcion, his sister Sandra Williams, and his brother Jorge Delgado. Oscar is survived by his loving wife Delissa Delgado of 16 years together and 12 years married. His memories will live on through his children Marissa Navarro, Amanda, Denise, Samantha, and Oscar Jr. Delgado (Klarissa) and stepson, Joseph Aguilar (Jennifer). Grandchildren include Ricardo, Alizea, Aleka, Dominique, Jayden, Josiah, Eugene Jr, Mason, Madison, and Soraya. Step-grandchildren include MarcAntony, Ariana, Saphaire, Emma, and Elena. Great grandchildren include Carlos Jesse and Dylan Jr. His surviving siblings include Rene Delgado, Albert Delgado, Rose Garza, and Alma Cordova. Services for Oscar will be Friday, February 11, 2022, at 11:30 A.M. with a chapel service at 12:00 P.M. at Mission Park Funeral Chapels South.

Oscar Delgado Sr. entered eternal rest on January 30, 2022, at the age of 66. He was born on July 7, 1955, in San Antonio, Texas, to Walter and Concepcion (Hernandez) Delgado. After completing school, Oscar worked for the San Antonio Housing... View Obituary & Service Information

The family of Oscar Delgado created this Life Tributes page to make it easy to share your memories.

Send flowers to the Delgado family.