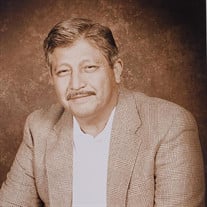 Pedro Martinez Aleman was born on July 1, 1953, to his late mother and father Celia Martinez and Ventura Aleman. He was the third oldest of nine siblings. Pedro went to be with the Lord on September 23, 2021, at the age of 68. My sweet husband, he was the love of my life, and I will always love him. He believed in God and his faith was so strong. He was kind, polite, and lots of fun. He was so mature from the very beginning. He was very responsible and a hard worker. He was a good provider. He was so considerate. He was the most selfless man I have ever met. He was very generous. He would think of other’s first before he thought of himself. He would treat everyone with dignity and respect. He was really genuine. He was funny and smart. He was a good father. He told me once that when our children were babies, he would rush home after work because all he wanted was to see them. Pedro and I were highly active and involved in Encuentro Matrimonial Mundial. We retired after almost 19 years. Our commitment to Encuentro Matrimonial Mundial took us to retreats all over the U.S. and Mexico. We had a good life. Thank God! Our faith grew stronger, and our relationship grew as well. Our children were and still are so great. Our grandchildren became the loves of our lives. Especially, more so, in Pedro. And so, Pedro had to battle cancer. When we talked, he said that he was grateful to God for 2 years and if this was his time then it was his time. After 13 days in the hospital, he went quietly and peacefully. I will always love my sweet husband. – Hilda Aleman He is survived by his loving wife Maria Hilda Aleman, children Tony and wife Virginia, Joey and wife Megan, Peter and wife Alicia, Pablo and wife Samantha, Miguel, daughter Rakel, and youngest brother who was like a son to him, Sergio and wife Rosie and their children Sergio Jr, Patrick, Mikey, and Rosita; grandchildren Anna, Anthony, Jett, Zoe, Angelina, Camron, Sydney, Aiden, Ethan, Jason, Quasean, Emilee, Javier, Soraya, Eusevio, and Nevaeh; siblings Antonia, Antonio, Amparo, Maria Luisa, Jose Luis, Hugo, and Carmela; and numerous nieces, nephews, and friends. Visitation will begin on Tuesday, October 12, 2021 at 5:00 p.m. with a rosary to begin at 6:30 p.m. at Mission Park Funeral Chapel South. Funeral mass will be celebrated on Wednesday, October 13, 2021 at 10:00 a.m. at St. James the Apostle Catholic Church with a procession from the funeral home. Interment will follow at San Jose Burial Park.

Pedro Martinez Aleman was born on July 1, 1953, to his late mother and father Celia Martinez and Ventura Aleman. He was the third oldest of nine siblings. Pedro went to be with the Lord on September 23, 2021, at the age of 68. My sweet husband,... View Obituary & Service Information

The family of Pedro Martinez Aleman created this Life Tributes page to make it easy to share your memories.

Send flowers to the Aleman family.