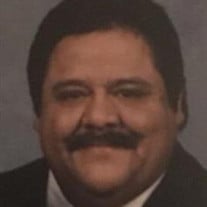 Ramon / Raymond Y. Flores (Pee Wee, Big Ray, Ray) went to his Heavenly home on Wednesday, September 8, 2021 at the age of 71 after a brave fight with liver cancer. He was born on January 22, 1950 in Casa Grande, AZ to Ramon and Maria Flores. He was later taken in as a baby and became the “son” of Jose and Adela Almanza. Although he was not officially adopted, these were his “parents”. He became a certified GM mechanic working at Smith Chevrolet and later “The Truck Shop” then became the mechanic for Lacks Furniture where he then became a furniture salesman for over 20 years. He then worked as a used car salesman for Gunn Chevrolet for 13 years before retiring for medical reasons. He loved playing 8 ball billiards and was on a team for many years until retiring for health reasons. He also loved to go salt water fishing at Rockport, Texas but did not get to go as often as he would have liked. He also liked watching the Dallas Cowboys, but his big love was the San Antonio Spurs. He was an original member of the “Baseline Bums” to which he was the sargent of arms. He also loved all the dogs that he and his wife shared through the years. He is survived by his wife of 42 years, Cecilia (Ceci) Flores; brother-in-law, Larry Gwinn (wife, Sally); cousin, Frank Tovar (wife, Mickey); numerous friends and acquaintances. He will be dearly missed, but long remembered by all who knew him. SERVICES Visitation will be held on Wednesday, September 15, 2021 from 6:00pm-9:00pm, with a Rosary at 7:00pm at Mission Park Funeral Chapels North. Funeral Mass will be celebrated on Thursday, September 16, 2021 at 2:00pm at St. Luke’s Catholic Church, with interment to follow at Mission Burial Park North. For personal acknowledgement, you may sign the online guestbook at www.missionparks.com in the Tributes section. MISSION PARK FUNERAL CHAPELS NORTH 3401 CHERRY RIDGE DR. SAN ANTONIO, TEXAS 78230 (210) 349-1414

Ramon / Raymond Y. Flores (Pee Wee, Big Ray, Ray) went to his Heavenly home on Wednesday, September 8, 2021 at the age of 71 after a brave fight with liver cancer. He was born on January 22, 1950 in Casa Grande, AZ to Ramon and Maria Flores.... View Obituary & Service Information

The family of Raymond Y. Flores created this Life Tributes page to make it easy to share your memories.

Send flowers to the Flores family.