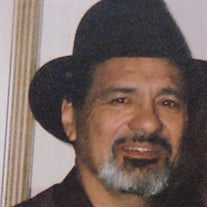 Reynaldo O. Vargas Sr. July 2, 1952 – February 2, 2022 Reynaldo O. Vargas Sr. was born in San Antonio, TX on July 2, 1952 and called to Heaven on February 2, 2022 to join his beloved parents Porfirio Mata and Oralia Orozco Vargas, brothers Andrew and Ralph, sisters Olga Lopez, Beatrice Gonzales, and Velma Vargas. He is survived by his sisters Patsy Perez and Yolanda Zurita. Survived by and blessed with six children, a proud parent of all his sons who serve/d in the military: Reynaldo Jr. (Navy) and wife Jennifer, grandchildren Marcos J. Caballero, India G. H., Jacob R., Erika E., and Samantha L.; his "unexpected" identical twins (Air Force) Alexander and Arthur and husband Randy Cash; Phillip Porfirio (Army) and wife Yee, granddaughters Jade C., Angelie G., Palina O., and Lenora L.; Solomon Vargas (Air Force), grandchildren Solomon E. Jr. and Sariah N.; and only daughter Priscilla P. J. D. Vargas. Reynaldo proudly served his country in the United States Army and received an Associates Degree in Welding at St. Philip's College in 1982. His career as a Machine Tool Operator spans nearly three decades of service as a civilian employee with the United States Air Force at Kelly Air Force Base in Texas and Tinker Air Force Base in Oklahoma. Reynaldo was recognized by President of the United States George W. Bush for his experience as a lead mechanic with the Engine Overhaul Division and also received several awards throughout his career for experience and leadership. Reynaldo enjoyed every moment of his life being the BEST Father and proud parent to his children whom he raised on his own, worked tirelessly to provide for them, went out of his way to keep them safe, and challenged them to succeed in their own lives. He held family in high regard. He loved his brothers and sisters, and cherished his nieces and nephews. His grandchildren held a special place in his heart and they always lit up his smile. He enjoyed playing basketball and tennis at a younger age, but his real passion was spending time with his family at Canyon, Braunig, and Calaveras Lake; swimming at Bandera, Blanco, and Guadalupe River. He never forgot his rod & reel and tackle box for some great fishing at the Gulf Coast! He enjoyed a cold beer at his favorite cantina while dancing to his favorite music: tejano, country, and classic oldies. He traveled with his children to many places and loved to eat his favorite food: fried fish, pork chops and a huge love for popcorn! A jack of all trades -- self taught in car mechanics, plumbing, and home construction -- always finding a solution to any problem. Always in our hearts - Reynaldo, a grandfather, father, brother, uncle, nephew, cousin, and friend whose love, guidance, and presence will dearly be missed. Visitation will begin on Tuesday, March 8, 2022 at 5:30 p.m. with a rosary to begin at 6:30 p.m. at Mission Park Funeral Chapels South. Funeral mass will be celebrated on Wednesday, March 9, 2022 at 1:00 p.m. at Our Lady of Perpetual Help Catholic Church with a procession from the funeral home at 12:30 p.m. Interment will follow at Ft. Sam Houston National Cemetery. For personal acknowledgement, you may sign the online guestbook at www.missionparks.com in the obituary section.

The family of Reynaldo O. Vargas Sr. created this Life Tributes page to make it easy to share your memories.

Send flowers to the Vargas family.