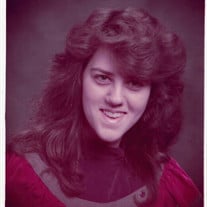 Rhonda Ruth Zalewa (formally Gonzalez), age 57, passed away on Friday morning September 10, 2021 at Brook Army Medical Center. Rhonda was a beloved daughter, sister, wife, mother and friend. A native of San Antonio and the beloved wife of her husband Paul and mother to Stephanie. Rhonda traveled far a wide with her husband Paul during his 24-year active-duty military career. Having lived in the San Francisco Bay Area, on the east coast of the United Kingdom at the twin bases of RAF Bentwaters/RAF Woodbridge, here in San Antonio when Kelly AFB was still active, Tampa Florida at MacDill AFB, southern New Jersey at McGurie AFB, in the southern Maryland area of the Washington DC Nation Capital Region, and finally ending back in Texas in Lakehills. They both visited not just the United Kingdom, but Scotland, Belgium, West Germany, the Netherlands, France, and Austria. Visiting San Francisco, Los Angles, London, Stuttgart, NYC, Boston and many other cities during those travels. Rhonda spent many years working as a retail cashier with the most years working for Wawa in Maryland, a company she loved working for. Both her and her husband enjoyed seeing the country side on their motorcycle and rode as much as life would allow and spending time with their grandsons. Rhonda was a member of the class of 82 graduating from Robert E Lee High School. She was proceeded in death by her brother Randall Wayne Gonzalez, her father Hugh L Gonzalez and is survived by her husband of 37 years Paul, mother Charlcey Eva Gonzalez, brother Hugh Lambert Gonzalez Jr (Rocky), daughter Stephanie Anne, grandsons Jay Wyatt and Ayden James, nieces Rhiannon, Rebecca, Randi Rain, and Mary, and a nephew Danny. Visitation will be Wednesday October 20, 2021, from 5:00 to 7:00 pm at Mission Park Funeral Chapels North. Funeral services will be held on Thursday October 21, 2021 at Mission Park Funeral Chapels North at 10am with the Rev. Bill Shockley officiating. In lieu of flowers donations can be made to Susan G. Komen foundation.

The family of Rhonda Ruth Zalewa created this Life Tributes page to make it easy to share your memories.

Send flowers to the Zalewa family.