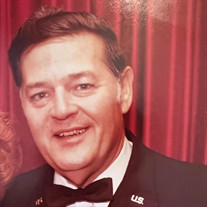 Richard Earl Gonzales Jr. passed away peacefully on the 20th of March, 2022. He was born on January 26th, 1930, in San Antonio Texas to his parents, Richard Earl Gonzales Sr., and Iva E. Cox Gonzales. He received his primary education at Riverside Park Elementary before moving to Brackenridge Highschool where he graduated with perfect attendance. He then attended St. Mary’s University for two years before enlisting in the Marine Corps, where he was deployed to the Korean Theatre of Operations. It is during this deployment that he earned his Purple Heart. After the war, Richard attended Trinity University where he received his masters’ degree in Education Administration. Additionally, he graduated from the U.S. Army Command, and General Staff College. Upon graduation he received an appointment as 2nd Lieutenant, U.S. Army. During his civil service work period at Fort Sam Houston, he was the Director of Sports and Athletic Training which included being project manager of the new Fitness Center which opened in 1995. In addition, he coached the Fort Sam Basketball Team, leading them to three Army Championship victories in 1967, 1971, and 1974. He also served as Chief of Discipline for the State Department when taking the U.S. Modern Pentathlon Team to the World Championship in Switzerland and Sweden in 1986-87. Throughout his career, Richard was involved with nearly every branch of the U.S. Military. In 1990, he retired with 40 years of military service at the rank of Colonel in the U.S. Army. He was highly decorated, including the Purple Heart, United Nations Medal of Korean Presidential Unit Citation, the U.S. Navy Presidential Unit Citation U.S. Marine Corps Service Medal, and numerous Army and National Guard medals and ribbons. He is survived by his “inner circle” of dear friends, Marilyn Rock, Gary, Laurinda and Ryker Norwood, Patsy Oppelt, Kathleen Kuper, and Nat, Alma and Nathan Garza. Graveside Service will be held on Monday, March 28, 2022 at 1:00 p.m. at San Jose Burial Park.

Richard Earl Gonzales Jr. passed away peacefully on the 20th of March, 2022. He was born on January 26th, 1930, in San Antonio Texas to his parents, Richard Earl Gonzales Sr., and Iva E. Cox Gonzales. He received his primary education at Riverside... View Obituary & Service Information

The family of Col. Richard E. Gonzales Jr. created this Life Tributes page to make it easy to share your memories.

Richard Earl Gonzales Jr. passed away peacefully on the 20th...