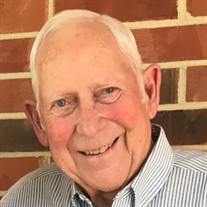 Robert C. Baker went to be with the Lord on March 6, 2022 at the age of 87. He was born on September 27, 1934 in Alice, Texas to Henry James Baker and Lola Vivian Collier Baker. He is preceded in death by his parents; children, Dale Robert Baker and Lisa LaNell Baker; and siblings Elizabeth (Betty) Bullen, Frances Gallimore and Harold Baker. He is survived by his loving wife of 63 years, Joyce Baker; daughters Donna Cantwell (Richard) of Georgetown, Texas and Sandra Kincaid (Tom) of San Antonio, Texas; grandchildren Candace Hilburn (Bradley) of Pleasanton, Texas; Courtney Fabricatore (Louis) of Pflugerville; and Julia Kincaid of San Antonio, Texas; great grandchildren Finley, Reagan, Riley, Tyler, Weston, Olivia and Logan; numerous nieces and nephews, and many other family members and friends. Robert was a Veteran of the Navy and served from 1953 to 1960, the last 3 years in the Reserve. He was always proud of his time in the Navy and it was common to see him wearing his caps bearing the names of the carriers he served on. In 1958, he met Joyce Hilburn and they married on January 31, 1959. She remained his one true “Sweetie Doll” through their 63 years together. Robert was a Master Electrician by trade and a career long member of IBEW Local Union 60 (International Brotherhood of Electrical Workers). In 2007, he was honored with a 50 year member certificate and diamond pin for his loyal and faithful membership in the Brotherhood. He retired from Sony in 1994. Upon retirement, they settled in Floresville, Texas. They enjoyed their retirement years, traveling in their RV and spending time with family and friends. He was particularly fond of crossword puzzles and reading books of many genres and had an extensive collection of books. Robert was a member of St. Anthony Catholic Church in Elmendorf, Texas. He was a member of the Men’s Club, ACTS, and served on several ACTS teams. A beloved father, grandfather, great grandfather (Popo), uncle, and friend - he will be greatly missed by all who knew and loved him. In lieu of flowers, a donation may be made to St. Anthony Catholic Church or to the Alzheimer’s Association, https://www.alz.org, in Robert’s memory. Viewing will begin on Tuesday, March 15, 2022 at 9:30 a.m. with a rosary to be recited at 10:00 a.m. followed by a 10:30 a.m. Funeral Mass at St. Anthony Catholic Church. Interment to follow at St. Anthony's Cemetery.

Robert C. Baker went to be with the Lord on March 6, 2022 at the age of 87. He was born on September 27, 1934 in Alice, Texas to Henry James Baker and Lola Vivian Collier Baker. He is preceded in death by his parents; children, Dale Robert Baker... View Obituary & Service Information

The family of Robert C. Baker created this Life Tributes page to make it easy to share your memories.

Send flowers to the Baker family.