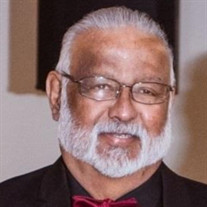 Robert N. Hernandez of San Antonio, Texas went home to be with his Lord and savior on Friday, January 28, 2022, at the age of 69. Robert passed peacefully with his beloved wife Stella and their four children by his side. Robert was born in San Antonio on March 26, 1952, to father Ignacio Hernandez and mother Maria Nunez. He came from humble beginnings. At an early age he helped out by working odd jobs he could find. His work ethic and desire to take care of his family led him to enlist in the Army at age 18 and serve his country. Robert had many accomplishments in his service to God and Country. His awards include the National Defense Service Medal, Combat Infantryman Badge, Vietnam Campaign Medal w/60 Device, Vietnam Service Medal w/1 Bronze Service Stars, Army Commendation Medal, and the Army Service Ribbon. He was a proud Vietnam Veteran. Robert was preceded in death by his parents and by his brothers Richard, Raymond, and his identical twin brother Ruben. Robert will be missed tremendously by his loving wife Stella Hernandez; children Michelle Hernandez Rosales (spouse) Joe A. Rosales Sr., Priscilla Sanders (spouse) Albert Perez, Felisha Hernandez (spouse) Jacob Hernandez, and Robert Hernandez Jr; grandchildren John Carranza (Josie Zuniga), Joey Rosales, Julie Carranza (Tyler Sanchez), Nathan Rosales, Jaydon Carranza, JonAlbert Perez, Emily Hernandez, Xander Ortiz; and great-grandchildren Jay-Alexander Zuniga, Juan Adriel Carranza; his brother Alex Hernandez; and his sister Sylvia Hidalgo. Friends & family are welcome to come pay respects on Monday, February 21, 2022 from 5 p.m. – 8 p.m. with a rosary to be held at 6:00 p.m. The visitation will be at the Brookehill Funeral Home on 711 SE Military Dr., San Antonio, Texas. The funeral mass will be celebrated on Tuesday, February 22, 2022 at 12:00 p.m. at St. Leo Catholic Church followed by a burial at Ft. Sam Houston National Cemetery with military honors. Following the burial, family and friends are invited to gather at the VFW Post 76 located at 10 Tenth Street, San Antonio, Texas for food and refreshments. Daddy’s memory will live in our hearts forever & the strongest in every holiday to come. He will always be remembered and loved.

Robert N. Hernandez of San Antonio, Texas went home to be with his Lord and savior on Friday, January 28, 2022, at the age of 69. Robert passed peacefully with his beloved wife Stella and their four children by his side. Robert was born in... View Obituary & Service Information

The family of Roberto Nunez Hernandez created this Life Tributes page to make it easy to share your memories.

Robert N. Hernandez of San Antonio, Texas went home to be with...

Send flowers to the Hernandez family.