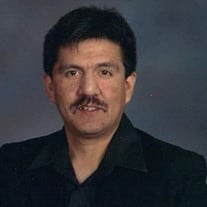 Rodney E. Galindo born on September 12, 1964 in San Antonio, Texas entered into rest on January 8, 2022 at the age of 57 years. He was preceded in death by his parents, Jacob and Estella Galindo; daughter, Roxanne Galindo; brothers, Michael Jacob Galindo, and Danny Galindo. He is survived by his uncle, Clem Galindo; aunts, Marjory Ybarra-Sanderlin, and Naveen Webb; sister-in-law, Rose Galindo, niece, nephews, cousins, and many friends. "Our condolences to the many fans, friends and family of a great camarada and a great musician. Always humble and always happy. Que descance, Rodney Galindo. We have lost another great musician in Conjunto Music. He is back with his beloved mom and dad, health and youth restored. May God's shining light rest upon him. "To all of Rodney Galindo Friends, his Family has let me know that he is no longer with us and is at peace... our hearts are broken...Rodney was more than just a friend, brother, He was a caring big hearted person with not a bad bone in his body, He was more than that. Rodney never bragged about himself so I will brag for him, as a teenager he loved playing the drums . He was my dad's drummer for many years, Rodney Traveled overseas, All over Europe. He accomplished so much as a musician. He went where many conjunto musicians have never gone. Met people we could only dream of meeting. One of the greatest drummers in the music industry. He played side by side with some of the Best. He would joke about being fired by Flaco 6 times!! One time for driving the truck and equipment trailer into the ditch! But of course after a few days my dad would get over it and he would play again. We would just laugh at all the crazy adventures he had on the road. He made a mark in this world and he will forever be remembered. It's not a goodbye but see you later Brother.❤" Written by Leonard Jimenez. Visitation will be held on Wednesday, January 19, 2022 from 4:00 p.m. to 9:00 p.m. at the Alamo Funeral Chapels with a rosary to be recited at 7:00 p.m. Funeral mass will be held on Thursday, January 20, 2022 at 11:00 a.m. at St. Patrick Catholic Church with the burial to follow at the Rossville Cemetery in Rossville, Texas

Rodney E. Galindo born on September 12, 1964 in San Antonio, Texas entered into rest on January 8, 2022 at the age of 57 years. He was preceded in death by his parents, Jacob and Estella Galindo; daughter, Roxanne Galindo; brothers, Michael... View Obituary & Service Information

The family of Rodney E. Galindo created this Life Tributes page to make it easy to share your memories.

Send flowers to the Galindo family.