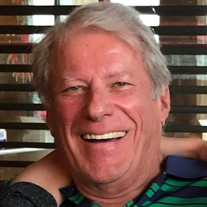 Roger M. Hayes, originally of Madison, Wisconsin, passed away on Tuesday, October 19, 2021 after reaching the age of 77 years old. After 2 months of fighting to recover from a stroke, with his wife Tricia by his side daily, he died peacefully in his sleep in the city of San Antonio, which they called home for his last years. Roger was born on January 27th, 1944 to Elsie Weston and David Hayes. He attended the University of Wisconsin, Madison, and was a proud Badger fan up until his final days. In 1974, he met the love of his life, Patricia Skroch, on a blind date. Not long after, they started their life adventures, moving to South Florida, and then to Lake Tahoe, where they wed on July 22nd, 1979. They then moved to North Carolina where they welcomed the birth of their first child, Melissa Ann, They made the choice to return to Wisconsin to raise their family. They welcomed son Adam Michael two years later. Roger loved cooking, and was the house chef. His dogs were always his best pals, including his most recent German Shepherd puppy Charley. He loved to watch sports, especially the Green Bay Packers. He spent his free time swimming and fishing in the lake with his children, and dancing in the kitchen with his wife. After living in Wisconsin for so many years, Roger and Tricia made the decision to relocate to San Antonio, so he could be with his young grandchildren, Weston and Emma. He was a wonderful grandfather that created so many memories for his grandchildren. Roger was a strong, proud and good man. He was always ready with an incredible story to tell and will be remembered and will be missed by many! Mr. Hayes is survived by loving wife of 47 years,Tricia Hayes; Children, Melissa Hayes Pressentin and her husband Benjamin Pressentin (San Antonio, Texas), son Adam Hayes and his love Karin Hollister (Pewaukee, Wisconsin); Grandchildren Weston James Pressentin (11) and Emma Rose Pressentin (9). His life was celebrated October 23rd with family and close friends.

Roger M. Hayes, originally of Madison, Wisconsin, passed away on Tuesday, October 19, 2021 after reaching the age of 77 years old. After 2 months of fighting to recover from a stroke, with his wife Tricia by his side daily, he died peacefully... View Obituary & Service Information

The family of Roger M. Hayes created this Life Tributes page to make it easy to share your memories.

Send flowers to the Hayes family.