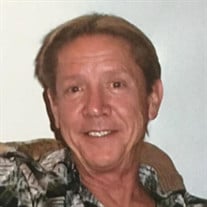 Samuel Edwin Bowling, age 65 went to be with the Lord on September 8, 2021, after a valiant battle with cancer. Sam is survived by his loving wife, Cella Orlowski Bowling, daughter, Chelsea Garcia, granddaughter, Ava Garcia and his beloved dog, “Bud.” His eldest brother and wife, Robert & Betty, his brother, Mervin, his brother and wife, Ronnie & Teressa, and his youngest brother and wife, Roy & Marilee. His eldest sister, Ann Garner, his sister, Jan Alexander, and youngest sister, Judy Munnich. As well as many dear and loved nieces, nephews, and cousins. Sam was preceded in death by both parents, Marguerite and Alvin Bowling, sister, Shirley DeGlopper, sister-in-law, Peggy Bowling, nephew, Glenn “Bo-Bo” Alexander and niece Cindy McClain. Sam became a father in 1984 to his son, Douglas Allen Bowling, who he will now walk beside in Heaven. Sam was born September 21, 1955, in his family’s home in San Antonio, Texas, he was one of 9 children. He attended Highlands High school and grew up on the Southside of San Antonio. As an eager young man, he worked for, The Light Newspaper. Then switched paths and worked as an oil field rough neck. He then changed careers and advanced as an Assistant Supervisor for Nash Phillips Copus Home Builders. He carried on his talents in carpentry for 20 plus years with Sherwin Williams until his battle with cancer began in April 2019. Sam was an outgoing and adventurous man. He loved to travel around the world and take in the beauty of life. Fishing down at the coast was one of his greatest passions. He also thoroughly enjoyed spending his time with family, whether it was playing poker games, swimming, or just relaxing by the pool, drinking his Budweiser and listening to classic rock. Sam really made the best of every situation and if you were there you were witness to the good time! Sam will be deeply missed by many, for his quick wit and sense of humor. He never failed to bring a smile to your face. His loving ways, and continuous support. As well as his genuine, one-of-a-kind, smile. A Memorial Service will be held on Saturday, September 25, 2021 @ 2:00 p.m. at Mission Parks Funeral Chapels South.

Samuel Edwin Bowling, age 65 went to be with the Lord on September 8, 2021, after a valiant battle with cancer. Sam is survived by his loving wife, Cella Orlowski Bowling, daughter, Chelsea Garcia, granddaughter, Ava Garcia and his beloved... View Obituary & Service Information

The family of Samuel Edwin Bowling created this Life Tributes page to make it easy to share your memories.

Samuel Edwin Bowling, age 65 went to be with the Lord on September...

Send flowers to the Bowling family.