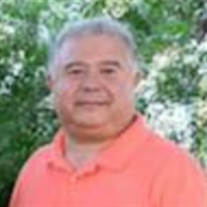 Our hero, our brother Simon M. Gonzales Jr., age 62, entered into rest on November 15, 2021. He fought a great fight to the very end never giving up no matter what came his way. Simon was born and raised in San Antonio, Texas on July 7, 1959. He graduated from Fox Tech High School with honors. He attended San Antonio College (SAC) and was selected by an engineering firm to do on the job training in Houston, Texas. As he mastered his skills as an engineer he was relocated to Austin, Texas. After the passing of our parents, Simon moved back home. He decided to attend SAC to finish the degree he started when he graduated from high school. Simon graduated with his Associates in 2017. Simon loved music and dancing. You couldn’t get him off the dance floor especially if it was the 70’s, country or Tejano music. He truly was a great dancer. Our brother had a very generous heart; he devoted himself to his church, Immaculate Heart of Mary. Simon served in the Youth Ministry, The Men’s Club, Ushering Services, taught Catechism on Sunday mornings and he served in the Eucharist Ministry. He wanted to serve those who couldn’t go to service and he was especially moved by those who were ill, so he traveled hospital to hospital in San Antonio. He volunteered his services and time to whomever needed help during any event. He was nominated and became the Coordinator for the church festivals. He loved festivals and especially Fiesta because it gave him an opportunity to truly serve the community with a food booth. His specialty was funnel cakes! Any opportunity to give to the church he did, he would give half of the profits from the events to the church. He missed our parents so much that he devoted a lot of his time to the seniors of the parish. He would help weekly and loved to fellowship with them. On Sundays he would help with serving breakfast after mass. Simon became a member of the Knights of Columbus to join his fellow brothers from church and to fellowship with other chapters of the community. Simon’s heart was of serving others and bringing people together, a true disciple of Christ. He was genuinely a good person, he was honest, loving, caring, giving, helpful and selfless. Even though Simon knew the likely outcome of his illness he was determined, courageous and brave through it all. That is why he is Our Hero. Simon was preceded in death by his parents, Simon A. Sr. and Benita M. Gonzales; brother, Gilbert M. Gonzales; sister, Diana M. Gonzales. He is survived by his sisters, Yolanda G. Perez (Richard), Rosemary G. Ramon and Elizabeth G. Palitza (Paul). He is also survived by nieces and nephews, April Lundquist (Aaron), Jesus G. Ramon Jr. (Ivanne), Jennifer G. Ramon, Linda Zuniga (Henry), Rachel Perez (Jon), Anthony Ramon (Destiny) and Michael R. Perez; great nieces and nephews and many other family members and friends. He was loved by all and will be deeply missed.

Our hero, our brother Simon M. Gonzales Jr., age 62, entered into rest on November 15, 2021. He fought a great fight to the very end never giving up no matter what came his way. Simon was born and raised in San Antonio, Texas on July 7, 1959.... View Obituary & Service Information

The family of Simon M. Gonzales Jr. created this Life Tributes page to make it easy to share your memories.