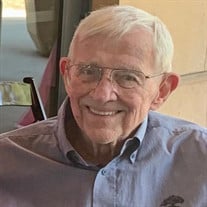 Thomas A. Drawert of San Antonio was born June 12th, 1939, in Oak Park, Illinois to Wallace G. Drawert and Gerda Marie Louise Drawert. He died November 15th, 2021 of Leukemia. Tom is survived by his wife, Carolyn Nagel Drawert and two sons Benjamin of San Antonio (wife, Erin, granddaughters Jenna, Katherine and Taylor) and Steven of San Antonio (wife Melissa, granddaughter Molly, grandson Hudson) and a brother James G. Drawert (wife Sandra) of Dallas. He was predeceased by brother William L. Drawert (wife Gerry) of San Antonio. Tom graduated from Druid Hills HS in Atlanta Georgia in 1957. Following a year at Georgia Tech, Tom graduated summa cum laude from the University of Texas in 1961 with an Honors Degree in Insurance. On April 7, 1962, Tom married the love of his life, Carolyn Nagel of Gonzales, Texas. They met at the University of Texas and were married 59 years. After service in the Texas National Guard as a medic, Tom spent 10 years with The Travelers Insurance Companies in San Antonio, New Orleans, and Hartford Connecticut. In 1972 the family returned to San Antonio where he became a named partner in Harding, Conley, Drawert, Tinch Insurance Agency, an insurance agency specializing in surety bonds and insurance for the construction industry. The firm is respected in its specialty and is well known in San Antonio. He retired in 2007. Tom was a loving father who led his boys by example. He consistently demonstrated his love for Carolyn, strong character, solid work ethic and dedication to his family. After retirement Tom pursued his hobbies of golf and fishing, enjoying many years at the family’s waterfront condominium on North Padre Island. He was a member of Oak Hills CC for 40 years, President of the San Antonio Texas Exes where he had the thrill of sitting with and introducing Darrell Royal at an annual football season opening party, president of the San Antonio CPCU Society and multiple terms as board member of the Independent Insurance Agents. A memorial service will be held at noon November 27th at Mission Park North Funeral Chapel with a reception to follow at Oak Hills Country Club. His ashes will be buried in the Nagel Family Plot in Gonzales, Texas in a private family service. In lieu of flowers, donations can be made to the Texas Exes (www.texasexes.org/give) or The American Cancer Society (www.cancer.org)

The family of Thomas Anthony Drawert created this Life Tributes page to make it easy to share your memories.

Send flowers to the Drawert family.