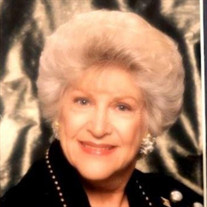 Elsie Victoria Dossett , fondly known as Vickie, was born on March 22,1923 in Hamtramck, Michigan to Stanley Denali and Elizabeth Klumoski. She went to be with our Savior at 98 years old on November 24, 2021 in San Antonio, Texas. During her battle with cancer, she was lovingly surrounded by and cared for by Mark, Linda, and Mike Dossett Sr. and the people at Senior Haven. Her daughters from Michigan, Sandy and Karol, called her regularly encouraging her with prayer and scriptures. Other family members and friends reached out to her as well. She is survived by 3 daughters Sandra (Schnurstein) Kent of Grandville, Michigan, Karol (Keglovitz) Jenney and husband , Ray of Battle Creek, Michigan , and Kelly (Keglovitz) Penskar and husband, Donald of Kalamazoo, Michigan. Her son Gerald Schurstein, DDS preceded her in death. Vickie has 6 grandchildren and 10 Great grandchildren from her children in Michigan. She is also survived by her loving husband of 43 years, Mike E. Dossett Sr. and three step children Mike E. Dossett Jr. and wife Linda of Schertz, Tx, Mark Dossett and wife Diane of Georgetown, Tx, and Melody Chestnut of Round Rock, Texas. Vickie has 9 grandchildren, 26 great grandchildren, and 2 great great grandchildren from her step children in Texas. Vickie worked in the 50’s as switchboard Line Operator for Michigan Bell Telephone Company in Ann Arbor Michigan. In the 1960’s and 1970’s, she was self employed with Vivian Woodward Cosmetics as a consultant. Vickie was also a Michigan National Bank Bankcard Representative in Battle Creek, Michigan. Vickie and Mike were married in Battle Creek, Michigan on February 10,1979. They moved to Texas in 1979 . They purchased their home in 1982 where they lived independently for over 39 years. They enjoyed playing golf, ballroom dancing, gardening, playing Mexican train, Christian love inspired novels, and attending The Hills Baptist Church together. Lulu ,their dog for many years, was a special friend to both. Among Vickie’s other interest were oil painting, doing Sudoku puzzles, playing Mexican train at church, and collecting antique keys. Burial will be at Fort Sam Houston at 2:15pm.

Elsie Victoria Dossett , fondly known as Vickie, was born on March 22,1923 in Hamtramck, Michigan to Stanley Denali and Elizabeth Klumoski. She went to be with our Savior at 98 years old on November 24, 2021 in San Antonio, Texas. During... View Obituary & Service Information

The family of Victoria E. Dossett created this Life Tributes page to make it easy to share your memories.

Elsie Victoria Dossett , fondly known as Vickie, was born on...

Send flowers to the Dossett family.