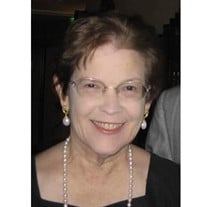 Virginia Scott Massey Bowden July 22, 1939 – May 2, 2022 Virginia Scott Massey Bowden, pioneering family and career woman, died May 2, 2022 at her home in San Antonio, surrounded by her loving daughters Sharon and Ellen, her beloved cat Al, and happy memories of her 61-year marriage to Dr. Charles Lee Bowden, who died just two months before her on March 1 of this year. She was 82 and had suffered from leukemia for several years. Ms. Bowden, a lifelong Texan who was born and raised in Houston by parents Calvin Scott and Juanita Massey, alongside beloved sister Anne, was proud to be a true Daughter of the Republic of Texas and direct descendant of Collin McKinney, Texas Declaration of Independence and Constitution signer (for whom the Texas county of Collin and city of McKinney are named). Always a top student, Ms. Bowden was the valedictorian of her class at Stephen F. Austin High School in 1957. She went on to major in Math and Education at the University of Texas at Austin, where she met Charles in the UT Education Library and graduated early as a Phi Beta Kappa honor society member to marry him in 1960. While at UT, Ms. Bowden was among the first students to take newly offered computer programming classes at the university (at a time when the early IBM computers were so large as to fill entire rooms). Ms. Bowden was sufficiently adept at this entirely new field that she started work as a computer programmer at Texaco, Inc., where she earned enough to pay Dr. Bowden’s way through medical school. She continued to work as a computer programmer as she and Dr. Bowden moved to Chicago and later New York City for his medical training. When the couple moved to Lexington, Kentucky in 1968 for Dr. Bowden’s Public Health Service commission, Ms. Bowden took the opportunity to earn a Master’s degree in Library Science at the University of Kentucky. Her advanced degree paid off when the two returned to Texas for good in 1970, where Dr. Bowden joined the Psychiatry Department faculty at the University of Texas Health Science Center in San Antonio. Ms. Bowden then got a job as a library systems analyst at the Health Science Center’s Medical School Library, where she would remain for 33 years, rising to Director and later Emeritus Director of the library, and turning the library from a two-story operation with one copy machine and no computers when she arrived into a fully automated and computerized 93,000 square foot new building that she helped design. During this period, while working full-time, Ms. Bowden also returned to UT Austin and earned her PhD in Library Science and Information. Ms. Bowden was a pioneer not only in her career but in her successful balancing of it while raising her two daughters, which was less common in her generation. Always there for her daughters as both children and adults, she somehow managed to do it all, usually while wearing a brightly colored outfit. She enthusiastically attended school and sporting events of her children and grandchildren, encouraged all of them to do their best, and always greeted everyone with a smile. Ms. Bowden also lived to fulfill the dreams of travel that her mother Juanita instilled in her as a child, visiting over 50 countries in six continents with her husband. She loved the planning almost as much as the trips, and happily assumed the mantle of travel agent for and with her extended family as it grew. Ms. Bowden is survived by her daughters Sharon Bowden Davis (Donn) of Great Falls, Virginia, and Ellen Bowden McIntyre (Patrick) of Nashville, Tennessee; her grandchildren Cameron, Cooper and Tess Davis, and Charlie, Kathleen and Virginia (Ginny) McIntyre; her nieces Carole Walter of Dallas, Deanna Neid of Austin, and Deidre Ransdell of Lexington, Kentucky, and her nephew Kyle Gandy of Georgetown. The family would like to give heartfelt thanks for the kindness and compassion of the many devoted caregivers from Caring Solutions who cared for both Dr. and Mrs. Bowden in the last years of their lives. A celebration of Ms. Bowden’s life will be held Thursday, June 9, at 11:00 a.m., at the First Unitarian Universalist Church of San Antonio at 7150 I-10, followed the next day by interment of both Ms. Bowden and Dr. Bowden together on Friday, June 10, at 10:30 a.m., at Fort Sam Houston National Cemetery.

The family of Virginia Scott Massey Bowden created this Life Tributes page to make it easy to share your memories.