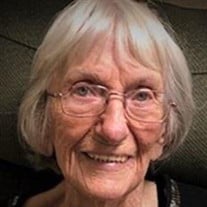 Virginia Jo Belknap Hans April 21,1921 - April 9, 2022 After more than a century on this earth, Virginia Jo Belknap Hans, a long-time resident of San Antonio, went to her heavenly home on April 9, just 12 days short of her 101st birthday. She passed away peacefully at a nursing home in Kerrville, where she had moved in 2017 to be near family. The fifth of six children, Jo was born on April 21, 1921, to Simruda Lauderdale Belknap and John Joseph Belknap in Ranger, Texas, and spent her earliest years in the small community of Tiffin. When she was 10, the family moved “to town” and she graduated in 1939 from Ranger High School, where she participated in debate, chorus and volleyball. A 1940 graduate of Johnson Beauty College, she made the permanent move from her hometown to San Antonio in 1941 to work at Franklin’s Beauty Salon. The next year, she joined the war effort at Kelly Field as a Texas version of Rosie the Riveter, repairing airplanes and getting them battle-ready. When World War II ended, Jo returned to her career as a hairdresser at Highland Park Beauty Salon, where she would meet her future husband, O.J. Hans, a beauty supply salesman. They were married in 1950, and after O.J. died suddenly in 1959, she operated her own business, the Fair Lady Beauty Salon, which she sold after five years so she could “work less and travel more.” Her many adventures would take her to Canada, Mexico, throughout Europe and the Caribbean and to all 50 states. Some of those trips were made in her own motor home. Besides traveling, Jo’s other passions were her church, sorority and volunteering in the community. She was a member of the First Baptist Church in San Antonio for more than 50 years, a long-time member of Beta Sigma Phi and founding member of its Epsilon Pi Master chapter, and a dedicated volunteer with the Visting Nurses Assocation and Friends of Hospice. Jo was preceded in death by her husband O.J. Hans; parents John and Ruda Belknap; sisters Lorene Akers, Veda Mae Parrack (AG) and Norma Jean Jetton ( Kenneth); brothers Melvin Belknap (Lora) and J.T. Belknap (Inez); niece Letha Jo Mills (Charles) and nephews Bill Akers, Melvin ‘Lanny’ Belknap, Jerry Belknap and Harold Rash. She is survived by her sister Delpha Lauderdale Potter (Bill); nieces Susie Parrack Brugger (Jim), Jean Belknap, Candy Huff Wilcox (Ronnie), Valerie Huff Farwell (John), Virginia Belknap Cowley, Janice Belknap Odom (Jim), Judy Belknap Parker (Michael), Debra Rash Norda (Brent) and Sandra Jetton Fullerton (Thurman); nephews Jim Belknap, Charles Parrack (Susie), Terry Rash (Sharon), Gary Rash and Leslie Huff; and numerous great and great great nephews and nieces, as well as special cousins Claudia Wiesepape, Stephen O’Neill and Weldon O’Neill and friends Dennis Wall and Jane and Donald Strawser. Visitation will begin on Thursday, April 14, 2022, at 1 p.m. with the funeral service to begin at 2 p.m. at Mission Park Funeral Chapels South, 1700 S.E. Military Drive, San Antonio. Interment will follow at Mission Burial Park South. In lieu of flowers, the family asked that donations be made in Jo’s name to the First Baptist Church, 515 McCullough Ave., San Antonio, TX 78215; Friends of Hospice, P.O. Box 40487, San Antonio, TX 78229-1487; or a charity of your choice.

The family of Virginia Jo Hans created this Life Tributes page to make it easy to share your memories.

Send flowers to the Hans family.