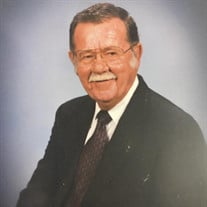 William Charles “Bill” Bray September 6, 1932 – January 9, 2022 Bill, also known as Dad, Grandad and Ol’ Dad in the car business, went peacefully to his Heavenly Father on January 9, 2022. Bill was born in Big Spring, Texas and moved to Ft. Worth at age 8. He played baseball at Arlington Heights High School, graduating in 1951. Bill attended Texas A&M for one year and then answered the call to serve his country in the United States Air Force for four years. Bill was stationed in Tripoli, Libya, and his last assignment was at Kelly Air Force Base when he met and married his sweetheart, Lois Janicke, at Riverside Baptist Church on January 26, 1957. After their marriage, Bill continued his education at UT Austin, graduating in 1961. Bill spent the majority of his career in the car business. He was with Jordan Ford for over 25 years, serving in various management positions and as General Sales Manager for several years before retiring. The love of God and the outdoors was instilled in Bill at a young age, and he passed that to his children and grandchildren with annual deer camps at the family ranch in El Dorado, TX, ritual spring white bass runs and trips to the coast where he loved taking his family. From Rockport to Port Aransas and the Landcut and to the blue waters offshore in his boat, The Hook-Em… he lived it! Bill enjoyed cooking, especially on the grill. In today’s terms he was a “pitmaster”. He would cook for family get-togethers and reunions. On Saturdays he would BBQ for his salesmen at Jordan Ford, whom most of them referred to him as Dad. Bill’s daughter, Lisa, has always said her dad was such an inspiration to her. When Lisa was born Bill said he had two jacks and a queen as she had 2 older brothers. She cherished the family trips especially to North Carolina and to the coast where she enjoyed her dad’s gumbo. Bill enjoyed watching sports and loved his favorite teams: the Longhorns, Astros, Cowboys and most recently the Roadrunners, but win or lose, he always said, “the sun comes up tomorrow”. Most of all he loved God and his family. Well Dad, today the sun is coming up for you - in Heaven. Bill was a member of the Unity Sunday School Class at Trinity Baptist Church where he enjoyed fellowship and prayer with others. Bill is preceded in death by his parents, O.V. Bray and Lillie Mae Bray, sister-in-law Dolly Janicke, Ada Mae Marshall and husband George, Mada McCord and husband Paul, brothers-in-law Walter Smith, Jack Janicke and wife Betty. Bill is survived by his loving wife of 65 years, Lois Janicke Bray; and their children, whom he deeply loved and was so very proud of, Will Bray of San Antonio, John Bray and wife Sherry of Bulverde, TX, Lisa Bray and fiancé Jon Priest of Houston, TX; their grandchildren Cullen Bray and his wife Kayla of Bulverde, TX, Jarrett Bray and his wife Whitney of Robert Lee, TX, who will soon be gifting us with the first great-grandchild. Bill was so proud. He is also survived by his sister-in law, Pat Smith of Mars Hill, North Carolina, and brother-in-law Frank Janicke of San Antonio; his cousins, Wanda Cottongim and husband Edward of Pottsboro, NC, Marie Fryer and husband Martin of Big Spring, TX, Bill Petty and wife Betty of Granbury, TX, Cathy Lester, (d. Don) of Ackerly, TX, Wes Wade and wife Susan of Seminole, TX. Also surviving Bill are many nieces and nephews some of whom kept him happy by texting him on game days. Visitation will be held on Friday, January 21, 2022, from 6 to 8:30 p.m. at Mission Park Funeral Home, 3401 Cherry Ridge Drive, San Antonio. Interment will be private. The Memorial Service will be held on Saturday, January 22, 2022, 10:30 a.m. at Trinity Baptist Church, 319 E. Mulberry with Dr. D Leslie Hollon officiating. In lieu of flowers, memorial contributions may be made to Trinity Baptist Church or the charity of your choice.

The family of William Charles Bray created this Life Tributes page to make it easy to share your memories.

Send flowers to the Bray family.