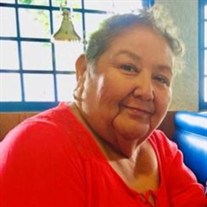 Yolanda Galvan went to be with the Lord on April 23, 2022 at the age of 76. She was born on August 12, 1945 in San Antonio, Texas to Patricio Galvan and Josefina Galvan. She is preceded in death by her parents and brother John Galvan. She is survived by her loving children, Yvonne Davis (Ben), Yvette Galvan and Michael Marcial; two grandchildren, Brandy Davis and Michael Marcial, Jr.; brothers, Arturo (Linda), Pat Jr. and Alex; sisters, Rachel Gonzalez, Laura Martinez (Richard) and Magdalena and numerous nieces and nephews. Yolanda grew up in San Antonio, Texas until her teenage years when the family moved to Torrance, California. There she graduated from Narbonne High School. In California she raised all three of her children as a single mother which she devoted her life to. She had them involved in as many extracurricular activities as possible in which she would often volunteer to the activities they were in becoming such as team mom. She was her children’s biggest fan, cheerleader, coach, and mentor. She also loved spending time with her children and others at the beach, camping, amusement parks, picnics at the parks, etc. Yolanda loved all celebrations and holidays and hosted many for friends and family. Family was everything to her and she would do anything to help and support them all. In 1979 Yolanda moved back to Texas with her children. She worked in civil division of the Bexar County Sheriff’s Office for which she retired in 2008. Yolanda has two Grandchildren, Brandy and Michael Jr. which she spoiled to no end. When she wasn’t spending her time with her children and grandchildren, she enjoyed her time doing arts and crafts such as ceramics and quilting. She painted beautifully. She was a parishioner at Holy Name Catholic Church which she attended most Sundays for the early mass. After a very short battle with a cancerous brain tumor, she passed away peacefully surrounded by her kids. She was so loved by all her family and friends and will truly be missed but never forgotten. In her final months, from her to you all, “Tell everyone that I love them!!! She will be greatly missed by all who knew and loved her. Visitation will be held on Monday, May 2, 2022 from 5:00 p.m. to 8:00 p.m. with a rosary to be recited at 6:30 p.m. at Dellcrest Funeral Home. Funeral Mass will be celebrated on Tuesday, May 3, 2022 at 9:30 a.m. at Holy Name Catholic Church with a funeral procession to depart Dellcrest Funeral Home at 9:00 a.m. Interment to follow at Mission Burial Park South. Following the burial, a reception will be held at the VFW Post 837 located at 4436 Valleyfield Dr. San Antonio 78222.

Yolanda Galvan went to be with the Lord on April 23, 2022 at the age of 76. She was born on August 12, 1945 in San Antonio, Texas to Patricio Galvan and Josefina Galvan. She is preceded in death by her parents and brother John Galvan. She is... View Obituary & Service Information

The family of Yolanda Galvan created this Life Tributes page to make it easy to share your memories.

Send flowers to the Galvan family.