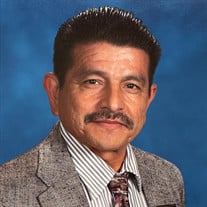 The Life and Legacy of Thomas S. Fonseca Thomas S. Fonseca beloved husband, father, and respected leader in the community went to be with the Lord on October 22, 2021 at the age of 61 after a long and brave battle with ALS. Thomas S. Fonseca was born in El Paso, TX to Guadalupe and Isabel Fonseca on February 13, 1960. He graduated 15th in his class from South San Antonio High School in 1978. He lettered in football and track and field and was named a 1st Team All District wide receiver in 1977 & 1978. He also played basketball and set a record in long jump at a whopping 20 feet 9.5 inches. He went on to receive his Bachelor of Science in Biology from St. Mary’s University as well as a master’s degree in Mid-Management Educational Administration from Texas A&M Kingsville in 1993. Thomas was well known as a firm but loving educator and administrator who worked over 30 years in the South San Antonio School District. He began as a science teacher in 1983 at Abraham Kazen Middle School and worked there until 1996 where he coached football/basketball and was later promoted to vice principal. In 1997, he became the principal at Kindred Elementary School. In 2006, he was offered to take on the position of principal at Dwight Middle School. While at Dwight, he was praised for transforming one of the toughest schools in the district into a TEA Recognized School for test scores in multiple areas of study. He later went on to continue his career in educational administration at Somerset ISD bringing him to complete 35 years as an educator and administrator. From 2011-2013 He worked at Barrera Veterans Elementary School and later became Director of Human Resources. While maintaining his career in education, in 2002, Thomas founded P&F Homes, LLC where he, his business partner, and crew built custom homes in the South Texas area. Thomas’ inspiration for creating a construction company stemmed from his years working at Guadalupe Lumber Company as a teenager. After his retirement from education in June 2013, he found himself still desiring to help students and took on a role as Director of Career Services at Career Point College in 2014 where he assisted over 350 graduates find jobs in their field of study. Even after complete retirement, Thomas took pride in becoming an Uber and Lyft driver forming many meaningful relationships. In addition to being a career man, he was also a man of faith. He served many years as a missionary with the organization Texas Baptist Men specializing in disaster relief. In 1993, he was ordained as a Deacon of Sur Zarzamora Baptist Church and served as the church treasurer for 32 years. He was also a mentor and friend to many. Most knew him as the avid morning runner, the man who loved to feed many with his huge BBQ pit, and someone who positively impacted the lives of many people in the community. But of the many roles he held in his lifetime, his most cherished role was that of a loving husband and father. He is survived by his wife of 33 years, Irma Perez Fonseca, his daughter Selina Michelle Fonseca, his son Thomas Samuel Fonseca, Jr., his parents Guadalupe and Isabel Fonseca, brothers Edward Fonseca (Frenchy Fonseca), Alfred Fonseca (Rosie Fonseca), Sisters Dolores Martinez, Susan Martinez (Tommy Martinez), Monica Garcia (Albert Garcia), sisters-in-law Keta Gonzales (Tom Pena), Molly Gonzalez (Raul Gonzalez) brother-in-law Oscar Perez (Sylvia Perez), and numerous nieces and nephews. Preceded in death by his in laws David and Olivia Perez, brothers-in-law Manuel Perez, Edward Perez, Rudy Martinez and niece Monnette Martinez. A celebration of his life will be held on Tuesday, November 9, 2021, at Mission Park Funeral Chapels at 1700 S.E. Military Drive from 5:00-8:00 p.m. with a prayer service starting at 6:30 p.m. Funeral Services will be held on Wednesday, November 10, 2021, at Sur Zarzamora Baptist Church at 9339 S. Zarzamora Street at 11:00 a.m. then departing to San Fernando Cemetery III at 12:00 p.m. Masks Required.

The family of Thomas S. Fonseca created this Life Tributes page to make it easy to share your memories.

The Life and Legacy of Thomas S. Fonseca

Send flowers to the Fonseca family.